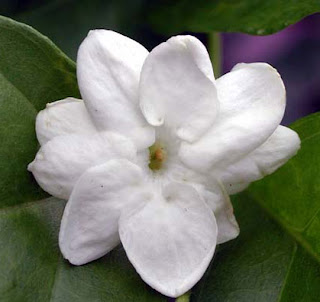 Jasmine Sambac Absolutes is one of the powerful and long lasting absolute from India. It is obtained by using Solvent Extraction of Jasminum Sambac flowers. The pure absolute is quite rare and can also find with the manufacturers who are doing direct extraction from concrete.

Today, in India, Jasmin sambac continues to hold a very important place in the culture of flowers which thrives throughout the country. In fact, it may hold the central position. The center for growing plants on a commerical scale is around Madurai in Tamil Nadu States. Near the sacred city of Rameshwaram, seedlings are cultivated on a large scale for distribution to farmers throughout the state. It is said that the soil conditions and climate, coupled with the sacred aura of the holy city are responsible for the high quality of the plants coming from there. One gentleman who is a major jasmine broker told from that area told us that he daily sells 10-15 metric tons of the fresh flowers which are provided by over 2000 farmers. The peak season for harvesting the flowers is from March-July with smaller amounts produced in August/September and January/February. It is such a volatile market that the price of flowers can be as low as 15 Rupees per kilo and as high as 500. In India there are several auspicious times for marriages and during that season the flowers fetch the highest prices. He told us that the flowers are not only destined for cities in Tamil Nadu, Karnatika, and Kerala States but are air shipped to Bombay and New Delhi as well as oversea to places like Dubai.

Ruh Bela - It is one of the North Indian variety of Jasmine Sambac. It have more floral note as well as organic hydro distilled quality.

Ankur Tandon
Kannauj, Uttar Pradesh, India
I am a distiller of Essential Oils from India. I am engaged in true oils manufacturing from over 13 years. We have the primary production of Rose Oil and other floral oils. Visit me : Shiva Exports India